“And when they heard of the resurrection of the dead, some mocked, while others said, “We will hear you again on this matter.” – Acts 17:32

Immediate responses to the gospel could be classified as: (1) Yes, (2) No and (3) Maybe Later.

Thailand’s capitol Bangkok and beach towns Pattaya and Phuket are high priorities on the evangelism hit list because they are popular hubs for LGBT+ culture and prostitution.

We live and witness in Bangkok. Seeds were scattered in Pattaya (closer to Bangkok) earlier this year. This week, I hit Phuket for the first time.

Conversations typically begin with small talk, then testimony, then often the gospel. Additional armament includes tracts in Thai and the Bible in virtually any language via Bible app.

We try to connect with as many on Facebook as possible and post Scripture regularly so that they will be exposed to the Bible and lines of communication remain open.

Facts:
Majority of folks engaged: Thai Buddhists
Most common response to the gospel: ‘You (Westerners/Americans) believe in Jesus. Thai people believe in Buddha.’
Example seemingly appointed engagement:
Transgender male-to-female- met outside her workplace. In response to testimony, she said, “So you are a real man now, not just a gay.” Pouring down rain, she asked me to come back to discuss- shared the gospel and tract, read the Bible, discussed previous exposure to Christianity and clarification of salvation requirements and Christian living. Asked me to send her things on Facebook (ex. Scripture) and basically ended with- ‘I will hear you again on this matter.’

In general, the lay of the land is a city with:
1) An area(s) known for transgender male-to-female (“ladyboys”)- strip bars, massage parlors and old fashioned street prostitution.
2) An area known for gay bars- resembles what is common in US cities.
3) A pedestrian-only street(s) that is a mixed bag- hosts party/sex tourists from around the world.

All 3 of the above areas and everywhere in between contain ladyboys soliciting outside massage parlors. The Lord’s timing is perfect. It is rainy season. Business is down, and folks have a few moments to spare.

Prostitutes speak the language of sex, so God works from there. Some say my eyes look kind and they feel good talking to me. You and I know that is the Lord.

Sharing Christ with jeering prostitutes can seem pointless. Nonetheless, this is what we are called to do- if for no other reason than to give each human being, created in God’s image, an opportunity to repent and get through the gates. The Lord has gone so far as to resurrect men and send them back into the pit on a rescue mission. Having been warned of coming judgment, all will be without excuse.

“Then the word of the Lord came to Jonah the second time, saying, ‘Arise, go to Nineveh, that great city, and call out against it the message that I tell you.'” – Jonah 3:1-2

Eyes welling up with tears as we shake the dust off our feet, we reflect on those who have rejected Christ, peer down at our watches wondering how much longer we have… and utter, “Even so, Come, Lord Jesus.”

Back in Bangkok Sunday afternoon, the Lord led to join a medical clinic. Specified assignment was to “play with the kids”. That was part of it and was certainly a blessing, but I knew better- that the Lord was doing something else. Our assignment is always to lead people to Jesus. So we scouted the area and found that it was also a ministry for juvenile (and adult) offenders. In the common area was a 14-year old playing guitar with his friend. The third seat in the small circle was empty. I sat down. After the ‘where are you from’ small talk, we got into business. He said that when he got locked up, he asked Jesus to help him and started to believe with his head but that he had never prayed to repent and give his life to Jesus. So he did! Please pray for “G”.

After many “No” responses, the Lord rewarded with a “Yes”!

THIS IS THE WHY- why the believer in Christ remains on the earth after coming to know Jesus- to fulfill the Great Commission.

Join the fight. Pray for training wheels. It’s scary at first, but the Lord gives the passion and leads. His heart is for evangelism. Be bold. Get close to the heart of Jesus.

As an old friend of mine used to say, “We serve an awesome God, brother.”
Praise the Lord!

As much as I have wrestled with trying to paint a Norman Rockwell portrait of this ministry, it just can’t be done. It’s nontraditional, and I would not be doing it unless the Lord had led after 6 years of training.

Please Note: I apologize in advance for using the term “ladyboy”. The term is not considered derogatory in Thailand, is more specific than “transgender” and less labor-intensive than stating “Male to female transgender” repeatedly.

As much as I have wrestled with trying to paint a Norman Rockwell portrait of this ministry, it just can’t be done. It’s nontraditional, and I would not be doing it unless the Lord had led after 6 years of training.

Please Note: I apologize in advance for using the term “ladyboy”. The term is not considered derogatory in Thailand, is more specific than “transgender” and less labor-intensive than stating “Male to female transgender” repeatedly.

It’s difficult to express in words how strong Thai and Cambodian cultures are. In the West, we expect parents to support their children… sometimes into adulthood. In Cambodia and Thailand, your children are your social security. Young people commonly move from the countryside to the city to make money to send back to their families… sometimes taking a “whatever it takes” approach.

Many ladyboys in Thailand are prostitutes. (Same applies in the U.S.) According to one man who moved from the poor Cambodian countryside to Bangkok and now lives as a ladyboy, his decisions to begin taking hormones, have surgery and become a prostitute hinged on the need to make money for his family. Previously he had been dating women and had no attraction to men. It seems there is a noble aspect in his mind to the choices he has made.

A common challenge in sharing the gospel in the West is that people do not want to admit they are sinners. It is refreshing to share the gospel in an environment where sin is so blatant.

The Lord uses the Cambodia connection (lived there before moving to Thailand). He has led to 3 Cambodian ladyboys who live in Thailand and feel isolated from their beloved culture. Through even a simple Cambodian greeting or mention of a common food, the Lord can provide comfort and build a bridge.

They say that a ladyboy in Thailand makes roughly $30-$90 USD per date. The bars are overflowing every night of the week.

For perspective, a professional in the Cambodian countryside can make roughly $100-200 per month.

When first approaching a ladyboy on the street, I am viewed as a “customer”. This makes for an interesting dynamic.

The sex tourism industry abounds in Pattaya, a Thai beach town. Where sin abounds, grace abounds all the more. Two recent nights there yielded rich ministry experience. In evangelizing, we focus on those who may typically be overlooked (ex. LGBT community). But in doing so, we do not purpose to overlook others. The gospel is for all and applies to all.

Freeze Frame Moment: Young man in corset and heels up the steps at the entrance of a strip bar raises a fist and shouts “Prah Yesu! (God Jesus)”, commencing the 2nd night’s walk throughs.

Although many scoff, the gospel of Jesus Christ is being shared, and people are being called to repentance. Interestingly many have been exposed to the gospel in the past. Sometimes it appears we are united in response to a praying mother or friend.

Bottom line is this ain’t rocket science, and it ain’t Matt. It’s the Lord at work.

PRAISE THE LORD for his undeserved favor for all! 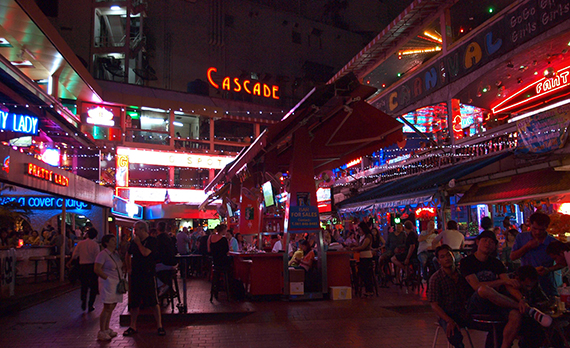